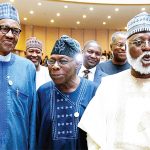 LAGOS – “There is anger in the land and the voices of reason are drowning very rapidly. It is clear that the situation requires that we all live up to the expectations of a nation that puts so much value on elders.

“We are all here as Nigerians who share responsibility for the state of our nation. Therefore, if any forum can help in the accurate identification of the problems and solutions to a peaceful and united Nigeria, let us be counted among such a forum.

“This roundtable discussion is not a mini-national conference or a forum to review the constitution, neither will it be fixated on those issues that feed the prevailing tensions. These are matters that will doubtless appear in our discussions, but they should not be allowed to distract from the key goals of the roundtable discussion.”

These were some of the words of the former Nigerian Head of State, Abdulsalami Abubakar, at a roundtable discussion on the security challenges facing the country, which was organised by the General Abdulsalami Abubakar Institute for Peace and Conflict Resolution in Minna, Niger State, on Monday.

A lot of Nigerian leaders have been expressing worry at the spate of killings, kidnappings, banditry and other forms of criminal activities rampaging the land.

Few weeks ago, former president, Olusegun Obasanjo, in his usual style, wrote an open letter to President Muhammadu Buhari in which he raised some concerns about the current security situation.

Also, on July 18, 2019, the Ooni of Ife, Oba Adeyeye Ogunwusi, personally met with the President to discuss the same issue. The monarch told the President that in the face of increasing insecurity in the country, the South West region did not want war, but was ready to collaborate with the government to salvage the situation.

There had been letters upon letters to the president complaining bitterly about the nation’s current security. The Alaafin of Oyo, Oba Lamidi Adeyemi, and the Oluwo of Iwo, Oba Abdulrasheed Akanbi, have both written to the president.

Apart from the usual Boko Haram insurgency, kidnappings, Fulani herdsmen/ farmers’ clashes, the most recent is the violent protest by members of the Islamic Movement of Nigeria (IMN), also referred to as Shi’ites.

While some Nigerians had called for the creation of state police, others called for the sack of current Service Chiefs as a means of addressing and tackling the current security situation.

However, General Abdulsalami and two former Chiefs of Defence Staff, Generals Alani Akinrinade and Martin Agwai, were among top ex-military officers who were in Minna last Monday to brainstorm on the lingering insecurity and other challenges bedeviling the country. The two-day roundtable was also attended by Ishola Williams, I.B.M Haruna and Haliru Akilu.

Abubakar, in his opening speech, said the roundtable was the centre’s contribution to the search for solutions to issues and matters around coexistence and security in the country, adding that the country was going through a period of trial amidst growing tension and resentment all over the country.

He explained further that the situation required that the elders who the nation attaches so much value to must stop it from total collapse.

He said the participants were carefully selected, just as he maintained that everyone invited was eminently qualified and represents interests and perspectives of the nature of the issues as well as the solutions needed to resolve them.

Former Nigeria’s Permanent Representatives to the United Nations, Prof. Ibrahim Gambari, who was part of the meeting, asserted that there was the need for the review of the approach in the fight against insecurity, just as he pointed out that there could hardly be a military solution to the menace in the magnitude Nigeria is currently experiencing it.

To him, dialogue should be employed as a means of addressing the situation. “Dialogue should not be seen as a soft measure but a tough option. Peace building has to be hand-in-hand with conflict resolution,” he said.

The meeting, which also had in attendance, former Minister of External Affairs, Prof. Bolaji Akinyemi; Prof. Awalu Yadudu; Prof. Ango Abdullahi; Ambassador Yahaya Kwande; former Military Governor of Rivers State, who is also the Amanayanbo of Twon Brass in Bayelsa State, Alfred Papapreye Diete-Spiff, and the Emir of Minna, Alhaji Umar Faroq Bahago, would have more people in attendance but for the boycott on the part of Ohanaeze Ndigbo; Pan Niger Delta Forum (PANDEF), Afenifere and Middle-Belt Forum.

Spokesman of the Ohanaeze Ndigbo, Chuks Ibegbu, in a statement explained that his group, PANDEF, Afenifere and Middle-Belt Forum decided to stay away from the roundtable, because they were lumped together with the Miyetti Allah Cattle Breeders Association of Nigeria (MACBAN).

According to him, “We are not against General Abubakar’s move but proper things should be done properly. Apex socio-cultural groups in the country should not be expected to be in the same pedestal with an association of cattle breeders.

“Miyetti Allah should have a roundtable with fishermen, farmers, goat breeders, poultry farmers and artisans, who are in same category with them,” the statement read in part.

Ibegbu bemoaned religious conflicts and extremism in the country, calling on warning that countries trying to destabilise Nigeria through religion, should desist from such act in their own interest, “whether Arabic, European, Asian or even traditional religionists, we cannot compromise the secularity of Nigeria.

“Where one man’s rights end, another man’s own begins, and nobody knows it all in matters of religion. I have always said it that one of our greatest problems is pastors and imams with their own subjective views of religion,” he added.

On their parts, leaders, under the aegis of Southern and Middle Belt Leaders Forum (SMBLF), disclosed that they had bought air tickets and concluded arrangements to travel by air to Minna. However, they said they were compelled to reject participation in the peace talks in a last-minute decision when they discovered the inclusion of MACBAN among those invited.

They expressed their displeasure at the inclusion of MACBAN, which they considered a mere trade association for cattle herders and whose members have been accused of various violations of human rights, including the right to life, across the country.

Their discontentment was made known through a statement jointly signed by Chief Edwin Clark of PANDEF; Chief Ayo Adebanjo of Afenifere; Chief John Nwodo of Ohanaeze Ndigbo; and Dr. Pogu Bitrus of the Middle Belt Forum.

The group stated that they considered sitting with the cattle breeders as a grave insult to their bodies and coming to a roundtable with the group would mean “acquiescence to the narrative that put them in the same bracket with those wielding illegal AK-47 all over the country and inflicting terror on fellow citizens.”

They promised to participate in the talks if Gen. Abubakar would agree to remove MACBAN from the list of participants.

A chieftain of the All Progressives Congress (APC), Fouad Oki, backed the non-attendance of the SMBLF members but noted that the reason given was not too acceptable.

According to Oki, “If I am in the same shoes with the forum, I wouldn’t have attended such a meeting on the condition that whatever would be discussed in such a gathering cannot influence anything in the country since it could only be passed to the federal government in the form of suggestion or advice and nothing more.

“As for me, I will not attend because I do not know in what capacity the former head of state is summoning a roundtable to which the federal government or any of the state governments is privy. I could not see any serving security officer at the event.

“Another point is that Nigerians are gradually losing confidence in some of our leaders, including most of the retired generals we have around. Do I expect those leaders to go and sit for another jamboree? I don’t think so,” he added.

Their position was contained in the communique signed by the Director of the Abdulsalami Abubakar Institute for Peace and Sustainable Development Studies, Dr. Diamond Preye Nebechukwu.

The participants further recommended that the role of the military should be limited to defending Nigeria and “not doing police jobs as witnessed all over the country.”

The communiqué further said that police and related paramilitary organisations should be better trained and equipped in playing their traditional roles.

“Nigeria needs to accelerate the process of recruitment of additional security personnel especially the police. This calls for community policing,” the communiqué read in part.

The participants further noted that poverty, arising from economic crisis, has been identified as one of the main causes of insecurity across the nation. They also said that the proliferation of small arms and light weapons have fueled the crises.

The communiqué further reads: “The Participants were in agreement that every part of Nigeria is today bedeviled by one form of extremist violence or the other and that these conflicts are increasingly having corrosive effect on the Nigeria State.

“The cause of the insecurity include, poverty rising from the economic crisis in the country and bellicious political activities, environmental scarcity in the far north and the rising perception of injustice by ethnic and religious groups.”

The communiqué further proffered that federal and state governments should ensure clear separation of religion and the state adding that there should be models for mediation set up by state and federal government.

Though, the roundtable has been held and suggestions have been made as to how the current situation could be addressed, it is, however, left for those at the helms of affair to heed to suggestion given by the roundtable.

The Buhari Media Organisation (BMO), has, however, hailed Gen. Abdulsalami Abubakar, for quietly spearheading the quest for peaceful co-existence in the country, without heating up the polity.

According to the group, “this was the path former Heads of State were expected to toe, based on their national profile, rather than triggering bellicosity that could further widen the nation’s fault lines”

The group made the commendation in a statement signed by its Chairman, Niyi Akinsiju and Secretary, Cassidy Madueke on Wednesday, in Abuja.

The group said that the move by Abdulsalami is worthy of emulation, by former leaders and any Nigerian aspiring to leadership position in the country.

“Not many Nigerians were aware that the former Head of State, through the Abdulsalami Abubakar Institute for Peace and Sustainable Development Studies (AAIPSDS), was working on a Peace Summit until some of the invited groups brought it into the public domain.

“And this was at a time another former leader Olusegun Obasanjo, was also in the public eye for an open letter in which he tacitly upbraided an entire ethnic group, over some grievances which he suggested could be resolved at a National conference,’’ the group said.

BMO noted that rather than take a similar route with (Obasanjo), Abdulsalami ensured that participants representing various interests, as well as those with different perspectives on the emerging security challenges, showed up in Minna, Niger State.

It added that the meeting was to proffer solutions for a united and peaceful Nigeria.

“We are urging Chief Obasanjo to consider emulating Abdulsalami’s unifying peace initiative and peaceful disposition, rather than the divisive efforts he had in recent times been engaged in.

The group added that the divisive effort deployed by Obasanjo was bound to dent his credentials as a respected and unbiased national figure,” the group said.