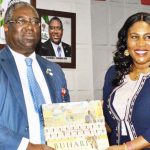 The last may not have been heard over the matter involving Access Bank Plc and the former Petroleum Minister, Chief Don Etiebet, over indebtedness claim of $6,382,665, with the bank, saying that Etiebet is avoiding payment and resorting to using security agencies to intimidate the bank.
Investigations revealed that on November 21, 2014, the Bank vide an accepted offer letter to the Customer availed a $6million Import Finance Facility (IFF) to facilitate the importation of Automotive Gas Oil (AGO) for supply to Mobil Producing Unlimited by the
Customer. The facility was tenured for one year with a maximum of 90 days circle.
In addition to the $6million IFF, the Customer was also availed a N100million Revolving Time Loan vide the same offer letter for the purpose of facilitating the payment of
Custom duties and other related Logistics. This was also tenured for one year with a maximum of 90days circle, adding that Several Letters of Credit (LCs) were issued on the facilities, but only one remained unpaid which is A2015C1091CL. The facts on the stated LC are : in April 2015 the Customer submitted a Proforma Invoice valued at $5,802,500.00 (five million, eight hundred and two thousand, five hundred United States Dollars) and informed the Bank it had an order from Mobil.
Consequently, LC A2015C1091CL was issued in favour of a company called Augusta Energy SA (“Beneficiary”).
Upon presentation of all shipping documents required for this particular LC, funds were remitted by the Bank to the Beneficiary.
In 2016, the Bank stated that it increased the Customer’sIFF from $6million to $12million and same was communicated to the Customer vide offer letter dated January 20, 2016.
The bank claimed that when the facility was not paid, the Chairman of the Customer, Chief Don Etiebet wrote to the Bank vide letter dated November 9, 2016 that the LC was done with a third party known as Cast Oil &amp; Gas Limited and therefore, he was committed to repay the customer’s indebtedness.

The bank also stated that due to the customer’s failure to repay the sum of $6,382,665.71 at the expiration of the facility, the said amount was converted into a N2.2billion Term Loan vide offer letter dated July 4, 2017 and the unutilised sum of $5,617,334.29 on the $12million IFF was also converted to a 1,463,000.000.00 Time Loan vide the same offer letter.
Investigation revealed that on November 9, 2016, Chief Don Obot Etiebet had written a letter addressed to Access Bank apologising for failing to meet the payment
commitment to the bank.
“I refer to your demand for the payment of the outstanding L/C of $6,382,665.71 which was used to import 10,000MT of AGO to supply to Mobil Oil Nigeria Limited from Augusta Energy“I regret that this payment is still outstanding till today.
The true and correct position is that Top Oil And Gas Development Company Limited carried out a this contract with a third party, Cast Oil And Gas Limited (CASTOR OIL) which brought the project from Mobil Oil Nigeria Limited, which is a common practice in the industry that companies co-operate to execute projects of this nature and share in the profits”.
The letter also revealed that the chairman of Top Oil and Gas while regretting the delay in payment offers a new payment schedule. “I take this opportunity to commit to you that the debts of $6,382,665.71 to your bank shall be paid from alternative sources. I want to let you know that we all in TOP OIL regret this unfortunate situation but thank you so much for your continued understandingand cooperation”.
What is now intriguing is that the same customer who had written an undertaken letter tooffset the debt has also filed a criminal charge against the bank.
Investigation also revealed that sometime in April 2018, the Nigeria Police Force forwarded a Banker’s Order to the Bank to place a Post No Debit order on the
Customer’s account pending its investigation on the issuance of a dud cheque by the Customer to which the Bank complied.
“Few weeks after the earlier order, the Bank received another invitation from the Nigeria Police Special Fraud Unit. The invitation was premised on a petition by the Customer against Cast Oil &amp; Gas Limited.

As an aftermath of the invitation by the Police, the Customer engaged the Bank on June 1, 2018 to discuss its indebtedness and the repayment plan.
The Customer alleged it never received the shipment; hence it is not indebted to the Bank.

The meeting was inconclusive as it was agreed that the Customer reverts on June 4, 2018 with its repayment proposal.
“To the Bank’s surprise, the Customer wrote a letter dated June 7, 2018 informing the Bank that no repayment would be made until the investigation with the Police has been concluded. The Bank responded to the Customer vide letter dated June 20, 2018    and reiterated the fact that the Bank acted in accordance with the terms and conditions of the LC and therefore,demand the immediate payment of the Customer’s indebtedness.
“The Customer responded vide another letter dated June 22, 2018 and restated its earlier ]position contained in its letter dated June 7, 2018 that the Bank aided in the laundering of the $6,382,665.71.
The current outstanding indebtedness on the facility as at date is N2,544,037,326.00 (two billion, five hundred and forty-four million, thirty-seven thousand, three hundred and twenty-six Naira).
On 21 June, 2018, the Bank called in the Corporate Guarantee of Obodex Nigeria Limited. Later on June 28, 2018, the Bank also called in the Personal Guarantee of Chief Don Etiebet.
The Bank said it commenced recovery action against the Customer, Obodex Nigeria Limited and the Petitioner (in their capacity as guarantors) for the recovery of its indebtedness to the Bank.
“The Bank has therefore, appointed a receiver/manager on Obodex Nigeria Limited (owner of the property known as Etiebet’s place). In a bid to avoid the repayment of its indebtedness to the Bank, the Customer has been using Police to harass the Bank and its officials”.
“The Bank further stated that it became aware of a criminal charge against it and some of its officers when the Customer exhibited the criminal charge in its defence to the recovery action commenced by the Bank.
“It can therefore, be inferred that the primary purpose of the criminal action was to thwart the Bank’s recovery efforts as no crime was committed by the Bank or any of
its officials. The bank was subsequently served on March
6, 2019.
“Based on the foregoing, it is therefore clear that the Customer is using the Police as a means of avoiding its repayment obligations to the Bank under the facility.
The Customer has engaged the Bank with a view to settling the dispute; however the settlement proposal offered by the Customer was not accepted by the Bank.
The recovery matter came up on the April 4, 2019 for hearing of all the pending applications in Court and Court granted the Bank’s prayers that the receiver/manager
was duly appointed by the Bank and the subject property is under receivership. The Customer has appealed the Rulin The Bank said it did not commit any crime as all steps
taken were geared towards the recovery of the debt owed by the Customer.

The commencement of the criminal action is therefore, an attempt to blackmail and intimidate the Bank and its officers from continuing the recovery action.

An attempt to reach the Chief Don Etiebet to challenge the our sources of investigations failed.

COVID-19 Enforcement: How Has Sanwo-Olu Fared ?