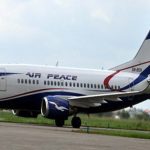 Accident Investigation Bureau (AIB) on Tuesday said it has begun investigation into the circumstances leading to an Air Peace Boeing 737- 300 that had a burst tyre on land at the Murtala Muhammed International Airport, Lagos.

There were 133 passengers on board the aircraft which took off from Port Harcourt en route Lagos.

The AIB according to its spokesman, Tunji Oketumbi said the aircraft nose wheel collapsed on landing at Runway 18 Right forcing the gear tyre to shear off.

He said the AIB was informed of the accident by the airline, in which there was a minor injury, but no fatality.

Meanwhile, Air Peace has commended Captain Ajibola and her crew for handling a situation in Lagos Tuesday morning.

“Caption Ajibola noticed sudden weather changes when approaching Lagos and demanded to land on the International runway as it is longer and wider than the domestic runway. After landing safely and rolling to the runway exit, the nose gear developed a problem and partial collapsed.

“The crew notified the airport authorities who quickly ensured the safe disembarking of the passengers via the passenger door.

“We are committed to the safety of our passengers at all time. We will continue to operate in line with international practices and in accordance with regulatory guidelines. We are being assisted by the various authorities to determine to cause of the incident,” the airline said.

How six banks raked N34.38bn through e-banking in 6 months

Onnoghen Appeals Conviction By Tribunal, Lists 16 Reasons Why He Should Be Acquitted