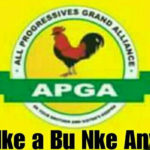 The Imo chapter of the All Progressives Grand Alliance (APGA) has appealed to the state Independent Electoral Commission (ISIEC) to provide a level playing field for all the political parties during the Local Government elections scheduled for December.
The party’s state Chairman, Mr John Iwuala, made the appeal on Tuesday, when he paid a courtesy call on the Chairman of the commission, Mr Julius Onyenaucheya, in Owerri.
Iwuala said that arrangements by the party for the polls had reached advanced stage and hoped that APGA, which he described as a moving train, would emerge victorious at the polls.
He said: “We want to assure ISIEC and our supporters that we are ready for the LG elections.
“All arrangements have been concluded and we urge ISIEC to provide a level playing field for all political parties participating in the process.”
He advised interested persons to take immediate steps to join the party ahead of the victory ahead.
Responding, the ISIEC chairman said that the commission was putting finishing touches to preparations for the elections.
Onyenaucheya, who was represented by the ISIEC commissioner for Information and Voter Education, Mr Nwachukwu Nwanesi, gave tha assurance that the commission would not fail Imo people.
He further underscored the need for security agencies to be neutral during  the election.
According to him, the neutrality of the security agencies remained one of the important conditions for credible elections.

Presidency: I Asked Oshiomhole To Contest Against Obasanjo, Not Buhari – Sagay