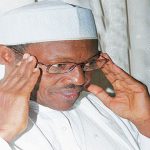 agency on the lawmakers’ resumption from their current recess.

The Secretary to the Government of the Federation (SGF), Boss Mustapha, disclosed this in an interview with newsmen on the sidelines of the just-concluded meetings of the African Export-Import Bank in Moscow.

Buhari will place the issue before the National Assembly as quickly as possible, Mustapha declared, explaining: “Our system is unique. We have an executive system where your membership of a parliament denies you the opportunity of being a minister unless you resign from.

“Mr President is working on his list or must have concluded. He mentioned in his Democracy Day broadcast that he is going to assemble competent Nigerians to help him implement his programmes.

“He was inaugurated on May 29. We had the Democracy Day celebration on June 12. It was a choked-up programme as we had to work towards the emergence of the leadership of the National Assembly because there is nothing you can do if their leadership does not emerge.

“So far, we have part of the leadership that has emerged. The other part will emerge after they return from their recess. They are reconvening on July 2 and it is when they reconvene that we expect they will finish other complements of their leadership.”

Mustapha said further: “There are other key officers needed in the introduction of an executive bill. You don’t go directly to the Senate President; you only write to him. It is the Majority Leader, who represents the party in the Senate that has the responsibility of introducing the bill, and he has received the list too.

“I believe that within the month of July, he will submit the list. It is then up to the Senate to do the needful and conclude the exercise. I keep emphasising that if you have a very good leadership in the National Assembly, these things can be finished in a period of one week or two.”

However, our checks show that there might be less hope for a cabinet before October, especially with federal lawmakers threatening to stay away from their duties if their allowances are not paid.

Two weeks after the inauguration of the Senate and House of Representatives, the National Assembly Commission is yet to pay the allowances and entitlements of the legislators.

The situation has reportedly compounded the lawmakers’ difficulties in settling down. Many of the lawmakers are coming to live in Abuja and work at the National Assembly for the first time.

Guardian reported that despite media reports of jumbo allowances and welcome packages, nothing has been given to any lawmaker.

A first-timer lamented that the impression given to them following their induction was that money would be released immediately after the inauguration to take care of logistics.

He said: “They have not paid us any farthing. We were assured that immediately after inauguration, the so-called welcome package would be given, to sort ourselves out. But as I speak, nobody has received any alert.

“Most of us who are newcomers are feeling the pinch more. Banks have been offering facilities. But knowing how these things go, their tempting offers may end up plunging us into debt gullies.”

A first-term senator, who expressed dismay at media reports about lawmakers’ allowances, said: “I have not seen the large figures you journalists bandy on the pages of newspapers. It has been tough these past two weeks.”

The lawmakers stressed that unless something is done before the expected resumption date of July 2, 2019, the only option would be to show up on July 2 and then proceed on a long vacation.

The Ninth National Assembly is made up of more first-timers. For instance, out of the 109-member Senate, only 43 (39 per cent) are returning for second or more terms, while 66 (71 per cent) are coming to the Senate for the first time.

Also, in the House of Representatives, almost 50 per cent of the 364-member legislature are first-timers. Precisely, 165 (45 per cent) are lawmakers coming into the Green Chamber for the first time, while 199 (55 per cent) are old-timers.

The implication of the delay in settling the entitlements, especially for senators, is that even if Buhari sends the list of his nominees, it would take the next two months before they are screened.

The Guardian also reported that the delay in properly constituting both chambers is responsible for the lack of action on the allowances. Apart from the Senate President and Deputy, Speaker and his Deputy, other Principal Officers including Majority and Minority Leaders have not been selected.

The Special Adviser to the President on Media and Publicity, Mr. Femi Adesina, had assured Nigerians that Buhari’s formation of a cabinet would not delay as it was in 2015.

The Federal Government meanwhile is not alone. A month after the assumption of office, some state governors like Okezie Ikpeazu (Abia), Emeka Ihedioha (Imo), Ben Ayade (Cross River), and Ifeanyi Ugwuanyi (Enugu) have also not properly constituted their executive councils, raising questions about their competence and preparedness.

In Kano State, besides the appointment of Head of Service, Secretary to the State Government and Chief Press Secretary, Governor Abdullahi Ganduje is yet to announce any other political position.

Similarly, activities at the Rivers State Secretariat are at their lowest ebb. A health ministry official who pleaded anonymity told The Guardian that several healthcare programmes remain stalled because a commissioner has not been appointed.

“It shows a lack of efficiency,” said a public affairs analyst, Eugene Abels. “Wike has been a local government chairman, a minister and governor, so there is no justification for him not to constitute the state executive, weeks after he was sworn in. His four-year term has started counting. The lack of a cabinet is a semblance of inefficiency. The state is dirty and unorganised. The secretariat also looks deserted,” Abels added.

Dickson and danger ahead of Bayelsa PDP primary