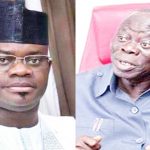 Lagos – Governor Yahaya Bello of Kogi state on  Wednesday said there is no truth in the report that some powerful forces in the Presidency and the leadership of the ruling All Progressives Congress (APC) have concluded plans to deny him the governorship ticket of the party based on the allegations of non- performance leveled against him.

He said on the contrary,  President Muhammadu Buhari and the leadership of the party, both at the national and state level are impressed with his performance and believe he has what it takes to win the state for the APC in the November 2 governorship election.

Speaking in a chat with Daily Independent, Kingsley Fanwo, Director-General, Media and Publicity to the governor said aside the governor’s sterling performance in the last three years, the outcome of the 2019 general elections in the state, where the APC recorded near hundred percent victory is a testimony to the fact that Governor Yahaya Bello is on ground and will deliver the state to APC if he emerges the party’s candidate.

“When the President was to start his state-wide campaign, there were arguments on where he should start from.  Many of the states were not ready and we had less than 36 hours to flag-off.  However, the governor of Kogi state said ‘We are ready! And within 36 hours, he pulled a crowd that was so impressive”.

“When Comrade Adams Oshiomhole, the national chairman of the party came, he said ‘ I am shocked to see this massive crowd’.  The President was so emotional that he had to move round the entire stadium, acknowledged cheers from thousands of supporters that thronged the stadium to welcome him to Lokoja and show solidarity with the host, Governor Yahaya Bello”.

“So, that shows that even if Governor Yahaya Bello is given five hours, his people are always with him.  That is something that is a big political capital to the leaders in the national secretariat. And I am sure that they will not want to throw away a tested hand and widely accepted leader for an untested hand”.

Speaking further, Fanwo said prior to the 2019 elections,  many of the stakeholders who placed bet that the APC will lost Kogi state both in the presidential and other elections were proven wrong after the party won the presidential election, cleared all the House of Assembly seats, won 2 out of the three senatorial districts and seven out of the nine House of Representatives seats.

“During the general elections, a lot of things were said by people both at the national secretariat and at the Presidency that Governor Yahaya Bello is owing salaries, he is a dictator and he is not popular and will not win a single seat in the 2019 elections. Some even placed bet on this that he was not going to deliver the state to APC”.

“But at the end of the day, the President won comfortably in Kogi state. We delivered two of the three Senate seats, we delivered seven of the nine House of Reps seats. And all the 25 House of Assembly members are all APC members. We are even confused right now because we don’t know how we are going to sort out the issue of minority leader because there is no minority party in the House”.

“ That is something that has never happened in the history of Kogi state, not even when the much respected late leader of our party, Prince Abubakar Audu was around. We could not record such feat not even when the tsunami of 2015 took place and everybody was voting APC.  Then the House of Assembly was dominated by APC but this governor has ensured that APC eventually became the majortity party in the present Assembly”.

“This is a straightforward thing. The Presidency and the party leadership at the national , and the state leadership of the party are very much aware that this governor will deliver in the November 2 governorship and so, they will be very happy if he emerges the candidate of the party”.

Also speaking on the petition written against the governor has described Kogi APC Elders who wrote a petition against his re-election bid as people who are being sponsored by politicians outside the state.

Speaking with Daily Independent, Kingsley Fanwo, Director-General of Media and Publicity to the governor said the so-called stakeholders are no more active members of the party.

Fanwo who said his principal is in firm control of the party affairs in the state also said the outcome of the 2019 election has shown that Governor Yahaya Bello is very much on ground and will secure the ticket of the party as well as win the governorship election.

“They are Elders who are no more active in the party. They have not been participating in the Affairs of the party since 2015. They are being sponsored by politicians from outside the state”.

“The Governor is in firm control of the party in the state because the people believe in him”.