THESE two political leaders share certain striking similarities that distinguish them from their contemporary rivals. They exude brilliance, diligence and deep sense of duty.

They display exemplary and inspirational leadership qualities, they have global perspectives of issues and pay attention to details. Both of them were born on Lagos Island but raised in Surulere.

A peep into the backgrounds of these two leaders will reveal the kind of outstanding individuals they have become since being in power.

Mr. Babajide Olusola Sanwo-Olu has a B.Sc. in Surveying and an MBA from the University of Lagos. He is an alumnus of John F. Kennedy School of Government, he also studied at London Business School. He eventually became an associate member of the Chartered Institute of Personnel Management. He attended Lagos Business School, worked in the Banking industry before moving into public service. Oblivious to a lot of people, he had been in Lagos state Administration for about 15yeas, making reforms in various ministries like Commerce & Industry, Economic Planning & Budget and in Ministry of Establishment & Training. His great innovation into training programmes of the latter cannot be over emphasised. 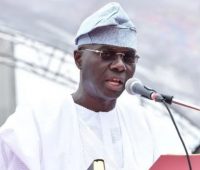 The last one year has witnessed landmark achievements in Road, Transport & Traffic management, Housing, and Health.

It is during the time of great challenges that great leaders are known. The Covid19 broke out in early 2020 and the battle against its spread brought out the best out of Mr. Babajide Sanwo-olu. Many Nigerians watch this Governor and his team in admiration and his efforts resulted in the containment of the disease. His name is increasingly and essentially becoming synonymous with good governance. With the Covid19 pandemic, he has taken governance in Nigeria to a whole new level. Post Covid19 era promises to be a period of monumental achievement given his innovative ability and developmental agenda.

Happy Birthday to a visionary and intelligent governor.

Happy Birthday to a brilliant lawyer and law maker with an uncommon erudition. Rt. Hon. Femi Gbajabiamila is a brilliant lawyer and law maker. He is also an alumnus of University of Lagos and was called to bar in 1984. Since his foray into politics, he has demonstrated exceptional leadership traits. The seeming understanding and maturity of law makers together with speedy processing of bills in the lower chamber of the National Assembly in the last one year has been a reflection of his inspiring leadership. Of course, the turbulence with which the House of Assembly was known for has become a thing of the past, this also reflects the good leadership the house is enjoying now.

His earlier years as the leader of the minority allowed him prove his momentum as a constructive and not a destructive opposition leader, he was very engaging and turned Minority into Majority by sheer use of effective communication. What other leaders in history could not achieve by the barrel of the gun, he achieved with his oratory prowess.

Any member of the House regardless of their political lineage, if he is Pan-Nigerian and really democratic is likely to flow with the Speaker.

Congratulations to Rt. Hon. Femi Gbajabiamila whose name is resonating over many sphers of live in Surulere. Gbaja market is one is the locations that has gotten its name from this political family, we have Gbaja bus stop also. Gbajabiamila has been one of the pioneers of Ansar-Ud-Deen Society of Nigeria whose Headquaters is in Surulere and his mum is a prominent member of this Muslim society. Gbajabiamila’s mother was once the Chairman of Surulere Local Government.

Have a wonderful celebration Mr. Speaker.