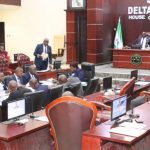 Asaba –Â The Speaker of the Delta State House of Assembly (DSHA), Honourable Sheriff Oborevwori, hasÂ urge chairmen of committees who are yet to submit reports on bills referred to their Committees to turn in such reports to enable the House to process them before the end of the Sixth Assembly.
Â
The Speaker said inÂ his welcome address at the resumption of plenary on Tuesday, reminding them theyÂ are at the last lap of the Sixth Assembly.Â
He urged them to always to put all hands on deck to ensure that together with the other two Arms of Government, they deliver on their electoral promises to the good people of our dear State
The Speaker commended Deltans for the re-election of the State Governor, Senator Ifeanyi Okowa and other candidates of the People’s Democratic Democratic Party (PDP), in the just concluded 2019 general elections.
In the Speaker congratulated Governor Okowa for his landslide victory and re-election as Governor and hailed Deltans for making this possible.
He said that “Distinguished colleagues, it gives me great pleasure to welcome you back to plenary from the short break occasioned by the electioneering activities. The elections have come and gone and I, therefore, wish to thank God Almighty for the peace and success of the conduct of the Â 2019 general elections in the state.
“Accordingly, I heartily congratulate His Excellency Senator Dr Ifeanyi Okowa, on his landslide victory and re-election as Governor of the state. This is indeed a vote of confidence passed on the Governor by an overwhelming majority of Deltans.”
Oborevwori used the opportunity to congratulate members of the Â House that emerged victorious at the polls, and also prayed for those that are going through challenges with their elections, saying: “I believe with God on our side, all things are possible.”
According to him, “In the same vein, I also congratulate all the Senators-elect, members of the House of Representatives elect and indeed all Assembly members elect on the platform of the People’s Democratic Party (PDP), in the state.
“Let me also seize this opportunity to specially thank Deltans for their solidarity and show of love for our great Party, the PDP, during the general elections. I promise we will never let you down.
“I commended members of the House for their unwavering support for the leadership of the House,” adding, “l thank you most especially for your dedication to the tasks of the Legislature. I wish to extend also my appreciation to Management and Staff of the Â Assembly for their support to the Leadership and members of the House.”

Oil prices fall for fifth day to lowest in a year