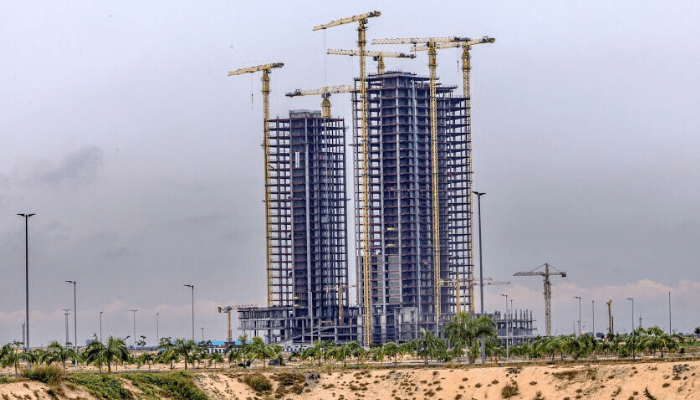 Eko Development Company Ltd, the real estate firm behind Eko Atlantic city has announced that the soon to be completed Azuri Towers is the tallest residential building in Nigeria and West Africa.
Azuri Towers; a large mass development comprising of three towers- office tower and two residential towers attained the new record with one of the residential towers, the Azuri One with 33 floors and a height of 146 metres.

Describing the iconic building which is located in the most dynamic area of Eko Atlantic City, the Marina; one of the waterways into Eko Atlantic expected to draw many visitors into the city itself, the developers said in Azuri Towers we will have 130 families living in the two residential towers.
“We have 27 floors of office apartment and that is 27,000 square metre of office space, we’ll have a shopping mall in the first two floors that will cater for the immediate needs of the residents,” Opayinka said during a media tour of the tower.

The dynamic twenty-fifth-century metropolis, which will benefit from international-standard facilities including modern hospitals, new school, and contemporary offices, will be a world-class safe environment in which to live, work and play, as assured by the company.

As one of the real estate projects in Eko Atlantic city, Azuri Towers is covered by the benefits from the City which is being built on 10 million square metres beside the Atlantic Ocean.

“Azuri Towers, our leading world-class development is part of a long-term programme to create outstanding homes with luxurious living. An investment in the Azuri Towers’ apartments for which projects a rental yield of 7 perecnt per annum with full occupancy represents an ideal option to preserve the value of hard-earned savings,” Opayinka said.

With a starting price of N280 million, Azuri Towers, has an environmentally-friendly transport system, including a modern motorway, up-to-date ferry service and helicopter service linking the city of Lagos, will ensure the Eko Atlantic is the best-connected city in West Africa, the Eko Development Company assured.

According to Opayinka,  each apartment in Azuri is dedicated to luxury with only the finest quality materials being used. “All are equipped with the latest high-end appliances which range from District Cooling air conditioning to broadband (which is also provided throughout the entire city).”

Pulev Accuses Joshua of Been Scared to Fight Outside London