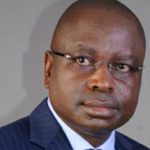 Enugu – Leaders of People’s Democratic Party (PDP) in Enugu North Senatorial District, otherwise known as Nsukka Zone in Enugu State at the weekend appealed to the governorship candidate of All Progressives Congress (APC), Senator Ayogu Eze, to withdraw his petition before the 2019 Enugu State Governorship Election Tribunal.
Eze, a former PDP member, had filed a suit at the tribunal, alleging that widespread rigging and irregularities marred the March 9 Enugu State Governorship Election, won by incumbent Governor Ifeanyi Ugwuanyi of the PDP.
However, a delegation of stakeholders of Enugu North Senatorial District who visited Eze at his Enugu residence on Saturday appealed to him to withdraw the petition for the unity and progress of Enugu State.
Speaking, the leader of the delegation, Senator Chukwuka Utazi told Senator Eze that the visit was necessitated by the cherished spirit of oneness of Enugu people, particularly Enugu North Senatorial District.
Speaking further, Senator Utazi added that the visit was therefore for Enugu people to work together as a family and support “our brother, Rt. Hon. Ifeanyi Ugwuanyi, the Governor of Enugu State and the governor-elect” to advance the cause of development in the state for the overall interest of the people.
Senator Utazi described Senator Eze one of the important personalities in Enugu State.
He said: “As brothers, we have done elections, and we have concluded elections, and we don’t want to dissipate energy fighting electoral battles in court. We want to make sure that we stay together as a family and make sure that we have enough development for our people, not just in the senatorial zone but in Enugu State as a whole. We don’t want a situation where litigation will distract our Governor from performing.”
According to him, “We are also here because our brother is important to us. As a very important person, a citizen of Enugu State and son of Enugu North Senatorial District, we cannot progress without him. Yes, we have played politics but let bygones be bygones because it is God that gives leadership.
“It is God’s desire that at this point in time, our brother Rt. Hon. Ifeanyi Ugwuanyi will be the governor of Enugu State and all of us are behind him, working together to see that he achieves a purpose for which God has desired for him to be the governor of Enugu State. We say that we cannot do that without our brother, Senator Ayogu Eze on board, not just him but all our brothers that ran elections”.
Responding, Senator Eze, who appreciated the visit and told the delegation that “I won’t constitute a cog in the wheel of the progress of our people”, promised to consult with “one or two members of my party” and give them a feedback in a very short while, “on the direction I want to go.”
His words: “Politics is just a platform for bringing development to our people. It does not cut the ties that we have as brothers.
“I want you to know that I did not go to APC because there was any personal problem between me and anybody. I was seeking a platform to bring development to our people.
“But I also know that it is God that gives power; if God appoints one, there is not much anybody can do; all of you gathered here are the key people from my senatorial district, from different local governments, people who have been senators, who have been local government chairmen, members of the NASS, people who have held different positions.
“I am humbled by your visit. I want to assure you that it will be out of place for me to just stand up today that you have come to give you my key response; I will talk to one or two members of my party, you will hear from me in a very short while on the direction I want to go. I will tell them that my brothers have come to me and this is what they brought on the table.
“So, I want to assure you that I will do all within my power to promote development within our State. I will not be a destabilizing factor in Enugu State. I just need to let you know that I won’t constitute a cog in the wheel of the progress of our people.”
Also in the delegation were, the member representing Nsukka/Igbo Eze South Federal Constituency and Member-elect, Rt. Hon. Dr Pat Asadu; Senator Fidelis Okoro; a former PDP state chairman, Engr. Vita Abba; the House of Representatives Member-elect, Igbo-Etiti/Uzo-Uwani Federal Constituency, Hon. Dr Martin Oke; PDP state deputy chairman, Hon. Innocent Ezeoha; Special Adviser to the Governor on Political Matters, Dr Dan Shere.
Others include Enugu North PDP zonal chairman, Nze Michael Onyeze; Igbo-Eze South Constituency Member-elect, Hon. Emeka Madu; Director-General, South East Governors’ Forum, Prof. Simon Ortuanya; Gen. Godwin Ugwoke (Rtd.); Hon. IG Ishienyi; Chief Mike Ejinima; Chief Albert Edeoga; Hon. Chinedu Onuh; Arch. Innocent Agbo; Barr. Ifeanyi Ossai; Marcel Okwo; Prince Emeka Odoh of State Internal Revenue Service; Chief Crescent Attama and Prof. Ofili Ugwudioha, etc.