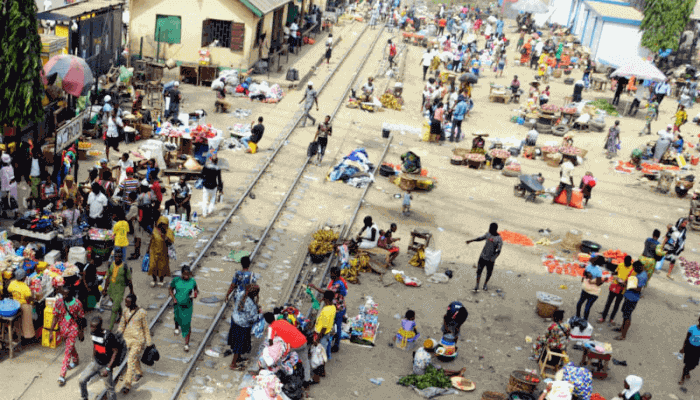 Worried by the rate of accidents and the pace at which traders are abusing the rail tracks, the minister of transportation, Rotimi Amaechi on Wednesday revealed that the federal ministry of transportation in collaboration with the Lagos state government is set to arrest and jail traders selling on rail tracks in Lagos.

Addressing newsmen after his routine inspection of the Lagos-Ibadan standard gauge rail on Wednesday, Amaechi explained that the pace at which traders are abusing the rail corridor especially in Lagos is becoming too worrisome.

According to the minister, “The rate at which people deficicate and display their wares on the rail tracks in Lagos is becoming worrisome. This has made the new standard gauge to look like an old track.

“The accident that happened recently occurred because a vehicle was parked on the narrow gauge rail tracks. I was told by the experts that, it takes 800 metres for a train to stop when it’s at full speed. The vehicle was parked there because the occupants were waiting for people to open the Arena shopping complex.

And because it takes 800meters for a train to stop when at full speed, the train could not apply brakes when the driver saw the vehicle parked on the rail tracks. That was why the train rammed into the vehicle, and unfortunately, a life was lost.

“The Lagos state governor and I have agreed that the train tracks is not a parking space nor a market, so henceforth, traders arrested selling along the train tracks will be prosecuted and jailed. We need to stop people encroaching on the rail tracks in Lagos.”

On the train stations, Amaechi said that the China Civil Engineering Construction Corporation (CCECC) has promised that by end of September, three stations will be ready for operations.

Amaechi said it will be unfair to say there are no changes in the train station construction. If you see the train station at Olodo in Abeokuta, that station is almost completed. The flooring has been completed, just doors, windows and painting that are remaining. At Kajola, what is remaining is just painting. There was a slight improvement in Ebute-Metta station too.

“For Apapa, the contractor is saying it cannot be ready because they started very late, but I am insisting that Apapa should be completed alongside the rest. I have told them to set up a task force just for Apapa alone. I will be coming to see Apapa myself by September ending”. The minister concluded.

Why We Adopted Stringent Processes For SIM Card Replacement – NCC