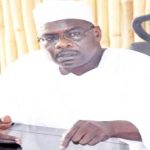 Senator Ali Ndume, former Senate Leader, is one of the frontline contenders for the position of Senate President in the ninth National Assembly. Ndume, who represents Borno South in this interview with journalists in Lagos, speaks on his nine-point agenda for the Senate and other issues. TEMIDAYO AKINSUYI brings the excerpts:

You are in the race for Senate presidency, what is the motivating factor?

I will start by saying that the institution of the National Assembly as far as I can see and as most people can observe, is drifting from what it is supposed to be and that is an independent arm of government; a constitution of 360 representatives of the people and 109 senators. The institution, especially the Senate is supposed to a stabilising institution of the Nigerian polity. In other democracies like that of the United States, which we copied, the Senate is looked upon to stabilise the polity as well as serve as a check and balance in the democratic set-up. So, it is important to have a Senate president, especially now that the institution is being privatised or personalised.

The way it is now, we tend to have a senators’ president instead of a Senate president. My aspiration is to be a Senate president, not a senators’ president. That is what the constitution provides for. The 1999 Constitution (as amended), in section 50 sub-section (1), states that the Senate will elect from among its members, the person to preside. When the person is elected as such, he or she loses even his or her right to vote until there is a tie. Now that the All Progressives Congress (APC) has a comfortable majority in the incoming 9th Senate, about 65, I think that we are ready to go no matter who is there as the Senate president because he cannot change the decision of the majority.

So, I am in this race for Senate president to partner with my colleagues to bring back the Senate as an institution that is independent as provided for in the constitution, but work inter-dependently with the executive without compromising constitutional provisions and also make laws that are necessary to move this country forward.

How much interest does President Muhammadu Buhari has in your ambition given the support you’ve given him in the last four years, especially on the floor of the Senate?

When I decided to contest for the position of Senate president, I did a lot of consultations and one of the first persons I consulted is Mr. President. I also consulted with the National Leader of our party and so many other stakeholders and all of them gave me their blessings. We are 65 senators-elect on the platform of the APC and Mr. President is father to all us. Also, constitutionally, all of us are qualified to vie or aspire for the position of Senate president. The other rules that are used to reduce the number of aspirants, like zoning, is a party arrangement, it is not constitutional.

You will recall that even when the party zoned it presidential ticket for the 2015 elections to the North, Governor Rochas Okorocha of Imo State, who is from the South contested the primaries because it is his constitutional right. The President I know has never interfered in the electoral process, so I am not expecting him to come out to say that he is supporting any person. So, I am comfortable that I have informed leaders of my party about my ambition and have not heard otherwise from even the party itself.

When this controversy over endorsement or anointment of a candidate for the position came up, the APC National Chairman, Comrade Adams Oshiomhole, made it clear that the National Working Committee (NWC) only recommended Senator Ahmed Lawan and that they are not stopping anybody from contesting. As I speak with you, nobody has contacted me to say ‘don’t do it’ because everyone knows that I have the constitutional right to contest for the position.

What is your relationship with senators-elect of Peoples Democratic Party (PDP) extraction because they will play a role in who becomes the next Senate president?

Let me say that the 9th Senate will be the Nigerian Senate; it won’t be a PDP or APC Senate. Again, the constitution recognises the Nigerian Senate. The senators from the other parties are my colleagues and each of them has his or her vote. So, if you are running for the position of Senate president, you have to reach out. Initially, I was constrained to reach out to the PDP senators because my party said ‘don’t go there.’ Because I am a party man, I didn’t go there. As a party man, if you go against your party’s directive, you are bound to receive the cane.

But, the party came out again to say ‘you can reach out to them.’ So, I rushed to them and so far, the response I am getting from my colleagues from the PDP has been encouraging. I am also getting the same response from senators elected on the platform of my party. So, am into this election to win; I am not into it to lose. I have the telephone numbers of all the 109 senators-elect and I do call them to solicit for their support. I am not looking for endorsement, I am looking for votes and by God’s grace, I will get the number that is required.

The APC leadership stemmed its endorsement of Lawan on the qualities it said it saw in him. Would you say that you have qualities that can march such qualities?

I said earlier that every senator-elect is eminently qualified to lead the 9th Senate and I have said it before that my colleague (Lawan) is eminently qualified to contest for the position of Senate president, which just confers on one the right to preside over other senators. But, I don’t think he has any quality above mine. I won’t say that he is better than me or that I am better than him. Election is a matter of the choice of those who will elect their leader. Fortunately, two of us have been there for a while. Lawan is my senior by four years, but I was in the leadership before him. I was the minority leader, when we were in the All Nigeria Peoples Party (ANPP) between 2007 and 2011.

In the 8th Senate, which is about to come to an end, I won an election to be the Senate leader. I need to say this because some people have the belief that Senator Bukola Saraki gave me the position of Senate Majority Leader. He didn’t give me the position. When the position was zoned to the North-East, four us Danjuma Goje, Ahmed Lawan, Binta Masi and myself – showed interest, but Goje later stepped down for me and Binta followed. Lawn did not turn up for the election that was conducted in Goje’s office, but his representative, Senator Sulaiman Nazif was there.

Nazif voted for Lawan and we counted his vote as two; that is his own and that of Lawan. In all, Lawan got two votes, while I got 10 votes. One person, Senator Bayero Nafada abstained. His excuse was that Lawan and I are his friends. So, I was not given the position of Senate leader. In fact, Saraki preferred Goje, who is friend to be the Senate leader, but fortunately God gave me the position.

Your governor, Kashim Shettima, who happens to be among the senators-elect, recently came out to endorse Lawan. Don’t you think that his action might affect your chances?

Every individual has a right to his or her opinion. My governor has expressed his position and the reason he gave for it was that the party opted for Lawan, and as a party man, he is going with Lawan. But, I will say that politics is very dynamic, so wait for the day of the election. In politics, what you hear at times is not what you see and you know that from now to June 10, when the 9th National Assembly would be inaugurated is a long time in politics. As I said, I am not in the contest to lose, but to win.

How harmonious will the Senate’s working relationship with the presidency be if you emerge as Senate president given that the party is not disposed to your candidacy?

Most Nigerians know that I have a personal relationship with President Buhari and I don’t think that he is opposed to my candidature. As I said earlier, I consulted with him and the leadership of the APC. So, I don’t think that they are opposed to my candidature and I believe that my emergence as Senate president will not pose any threat to the presidency or the party.

As I stated in my agenda, my main task is to create a harmonious working relationship with the executive, but also to ensure that the Senate is independent because that is necessary in a democracy for checks and balance. Mr. President has persistently emphasised this because he always say that he wants us carry out our oversight functions thoroughly and he has never interfered on that.

If the party approaches you for negotiation, so that it can avoid the pitfalls of 2015, will you heed to that?

I want to be the Senate president not because I am better than the other 108. My aspiration is about deepening democracy and exercising my fundamental right as guaranteed by the constitution. I am not into this business for negotiation or for me to be offered something. In the Senate, I have been the leader; I have been a committee chairman and also been without a committee; I have equally at a time been on suspension. So, what am I going to negotiate for? If I had wanted to negotiate, I will tell them to give me something or else I will contest, but that is not the case.

What to know before you delete your #WhatsApp