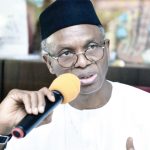 Speaking at the ceremony held in Government House, El-Rufai said the work ahead is very hectic and called on those sworn in to be ready for the task ahead.

The governor reminded his appointees that the goal of his administration is to make Kaduna a place where every Nigerian would be proud of and wants to reside.

He charged those coming on board to join hands with him, asking their family members and friends to also understand with them as the work ahead will take most of their time.

The governor said many of the appointees are qualified to work at the federal level, but still accept the appointment at the state level, adding that: “This is a happy occasion for me, to swear in another set of public servants. I appreciate the fact that they were humble enough to serve the people of Kaduna State. We all want to make Kaduna State better, where every Nigerian can call home.

“The work will take up their time, so I want to call on the family to understand with them,” El-Rufai said.

The post Just In: El-Rufai Swears In SSG, Deputy Chief Of Staff, Others appeared first on Independent Newspapers Nigeria.