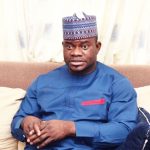 The All Progressives Congress (APC) Aspirants’ Forum, Kogi Chapter, on Monday rejected the candidature of Gov. Yahaya Bello of the state for a second term in office over alleged bad leadership and non-performance.

This was made known in a communique issued by the forum at the end of its meeting on Monday in Abuja.

The communique signed by its chairman, Mr Ben Adaji, appealed to Mr Adams Oshiomole, the national chairman of APC and its National Working Committee (NWC) not to give the governorship ticket to Bello.

It added that giving the ticket to Bello to run for a second term would be a risk, as the party may lose the state to the opposition.

It said Bello had remained adamant in spite directives by President Muhammadu Buhari to all APC governors to reconcile and accommodate the party`s aspirants after the last primaries, NAN reports.

The communique alleged that Gov. Bello had continued to treat Kogi aspirants as enemies and second class citizens in the party they laboured for.

It said the forum had, therefore, resolved to mobilise and support one of its members to contest the forthcoming primaries and the subsequent governorship election slated for November.

It added that after much deliberations and debate, the forum nominated three of its members which included: Alhaji Yahaya Audu, Dr Chief Adedoyin, and Dr Toyin Akanle for the contest.

“At the end of the deliberations, Alhaji Yahaya Audu was unanimously endorsed to contest the forthcoming Kogi Governorship Election,” the communique said.

The also forum used the opportunity to pledge unalloyed support for the President Buhari administration.

Why FG is insisting on IPPIS – ASUU