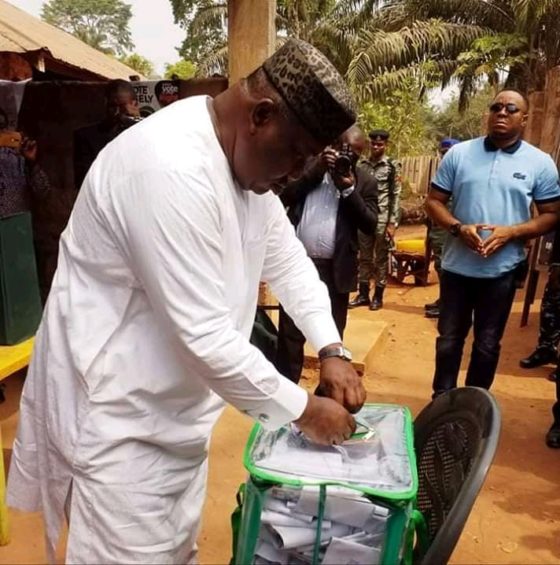 By Ikechukwu Odu and Chinedu Adonu

Local government election across the 17 local government areas of Enugu State was marred by low turnout of voters and late arrival of voting materials in many polling units in the state.

As there were no viable oppositions to the Peoples Democratic Party, PDP, in the state, opinion pool carried out by Vanguard revealed that voters declined to exercise their franchise as they alleged that candidates had been hand-picked by PDP.

The exercise was peaceful across the local government areas in the state as there was no report of violence recorded at the time of filing this report.

At the Amube Ward in Udenu Local Government Area, where Governor Ifeanyi Ugwuanyi, voted at about 11:17 AM, voters were scanty and unenthusiastic.

While speaking to Vanguard, the PDP candidate of Udenu Local Government Area, Solomon Onah, after casting his vote at his Umu Ezejo polling unit said the exercise has been peaceful in his area and beyond.

He said that PDP has done a lot for the state and deserves to be compensated for the dividends of democracy delivered to the people, adding that he is optimistic of victory.

He said “I am their son and the people came out en masse to support me. Election started in some nearby polling units before we began here.”

He commended the governor of the state for regular conduct of local government elections in the state, adding that the governor believes in due process in whatever he does.

At Ajuona Ovoko, Igbo-Eze South Local Government Area of the state where the member representing Nsukka/Igbo-Eze South in the House of Representatives, Pat Asadu, voted, few voters were seen exercising their franchise.

Asadu, while speaking to Vanguard also commended the governor for sustaining local government and grass-root democracy in the state.

At Essedo Ward 1 in Igbo-Eze North Local Government Area of the state, voters were seen waiting for electoral materials at about 1:45 PM.

James Ali, from the Ward explained that he came out at about 9 AM and after waiting for some time without the arrival of the election materials and staff of state’s Electoral Commission, he went home. He said he was surprised that the election was yet to start in his Ward.

He urged all the candidates to emulate the governor of the state in delivering good governance to the people of the state.

He also commended the governor for giving out N5m to the over 450 autonomous communities in the state for development projects.

Inspired By SDG 1, We Aim To Build People At Any Level Into Millionaires- Brown