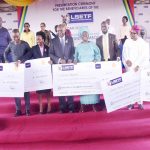 LAGOS – During the electioneering campaign in 2014 and early 2015, the then governorship candidate of All Progressives Congress (APC) in Lagos State, Mr Akinwunmi Ambode promised the people that, if elected, he would come up with an initiative to provide loans and create jobs for the people, especially women and the youth. True to his words, few months after assuming office as the 14th Governor of the state Governor Ambode immediately set machinery in motion to walk the talk, and eventually the Lagos State Employment Trust Fund (LSETF) was birthed on March 1, 2016 after the legal instrument had been sorted through an Executive Bill to that effect duly passed by the State House of Assembly.

Three years after, according to official report of the LSETF, over N6.5 billion had so far been disbursed to almost 10,000 beneficiaries, while over 3,500 unemployed Lagos residents have been provided with vocational training, with over 1,500 of the trainees placed in jobs.

Also, the Fund has supported over 80 start-ups through its Lagos Innovates programme, while in total, LSETF’s interventions have helped create almost 90,000 jobs in the State since it started operations.

Not done yet with the feats recorded, the LSETF recently signed a Memorandum of Understanding worth $10million with the United States African Development Fund (USADF) to support 15,000 youths in Lagos State within the next five years.

The deal is said to be in line with the mandate of the Fund to provide employment and entrepreneurship opportunities for Lagos residents, while through the MoU, both parties would provide an equal sum of $2m every year for five years ($10m in total) to provide skill development and internship opportunities to 3,000 youth between the ages of 18 to 35 totaling 15,000, with women constituting at least 50 per cent of the beneficiaries.

Speaking at the signing ceremony, which recently took place in Washington DC, the United States of America in the presence of executives of both agencies, members of the US Congress, partners and the international media, LSETF Board of Trustees Chairman, Mrs Ifueko Okauru, expressed optimism that the partnership would bring about massive positive impact.

She said: “This USADF-LSETF collaboration will enable the expansion of world-class vocational training centres available in the State, the development of 15,000 skilled youth for employment into targeted sectors, the provision of internship cost subsidies to employers and the tracking of real-time placement of unemployed youth into jobs.”

Also speaking, the acting Executive Secretary, LSETF, Mrs Teju Abisoye, said with the recent Labour Force Report by the National Bureau of Statistics, which showed a 6.7 per cent drop in unemployment rate as Lagos State provided the largest number of 740,146 jobs in the third quarter of 2018, it was obvious that the deliberate employment intervention policies of the Lagos State Government were finally impacting on job creation.

She said she was pleased to have the USADF join LSETF to create more jobs for youths while sustainably decreasing the alarming unemployment rate.

On his part, the President/Chief Executive Officer, USADF, Mr CD Glin, stated that the foundation was proud to be in partnership with the LSETF as its programmes had been independently verified to be making an impact in the lives of young Nigerians.

“This USADF-LSETF partnership further expands our existing commitment to investing in high-impact initiatives that are hinged on generating income, providing financial solutions and causing a change in the African economy,” Glin stated.

Basically, the LSETF was set up by Governor Ambode’s administration to tackle unemployment and promote job creation in the State, and in a bid to achieve its mandate, the Fund adopted three core areas of interventions including entrepreneurship, skills development and innovation.

Aside the fact that the core areas are targeted to every indigene irrespective of gender, religion or tribe, there is also a commitment to ensure at least 50 per cent of the beneficiaries are women through three programmes – Loan, Employability and Lagos Innovates.

While the Loan Programme provides access to finance for Small and Medium Scale Enterprises (SME), Micro- Enterprises (ME) and ME Startups (MES) beneficiaries with a maximum value of N5million, N500,000 and N250,000 respectively, the Employability Programme in partnership with United Nations Development Programme (UNDP) through the Lagos State Employability Support Project aims to increase the pool of skilled manpower to alleviate the acute shortages of employable labour in key sectors such as Manufacturing, Health Care, Construction, Entertainment, and Hospitality.

Also, the Lagos Innovates Programme is a dedicated platform that refers to a set of programs that provide support for the exciting and fast-growing startup ecosystem in the State. Lagos Innovates is also designed to assist founders and startups by facilitating access to high quality workspaces/infrastructure, learning, early stage investment capital and investor and peer networks.

Speaking during one of the presentations of cheques to beneficiaries of the LSETF loan programme, Governor Ambode said it was gratifying that the initiative was meeting the objectives of creating jobs and contributing to the growth of the economy.

At the event held at LTV Blue Roof, Agidingbi, Ikeja, Governor Ambode expressed fulfillment that the initiative, which is a brain child of his administration, had positively impacted many Lagosians and help to scale up entrepreneurship with many businesses now thriving.

“Today is a historic day. It is one of those days that we have this fulfillment that we tried our hands on something that was never done before and years after, we are able to see the result and I just want to say a big thank you to all of you that have accepted to be partners in this programme and to just congratulate ourselves that a day like this can come in Lagos State.

“I am particularly delighted to be here today to see for myself the manifestation of a small dream we had at the inception of this government and the little seed we have sown in the lives and businesses of Lagosians. The Employment Trust Fund was a promise we made to Lagosians in 2015 and today, I am happy to see the faces of the people whose lives and aspirations have been positively impacted by this programme,” Governor Ambode said.

The Governor, who noted the positive difference the beneficiaries of the scheme were making in the State, said the wonderful stories about the initiative were the true outcomes of governance, saying the vision was to use it to grow Lagos economy by supporting entrepreneurship, which in turn, would help to create jobs for unemployed residents.

The Governor said in line with his promise of inclusive governance, the beneficiaries of the LSETF programmes range from the youth to senior citizens in active business across all 20 Local Government Areas (LGAs) and 37 Local Community Development Areas (LCDAs) in this State, adding that the positive stories emanating from beneficiaries were pleasing to note.

“Apart from the jobs being created, I am especially pleased to see testimonials from some of our beneficiaries. I watched the video of Ibrahim Shuaib; a final year student of Dentistry at the Lagos State University Medical School. With a loan of N250,000, Ibrahim has not only grown his dry-cleaning business, employing over 20 people, but also started another business which his sister runs.

Commenting on the initiative during one of his visits to Lagos, Vice President, Professor Yemi Osinbajo hailed the State Government for coming up with such brilliant idea, saying that it was particularly laudable that over 12,500 new jobs were created within the first six months of the scheme.

Osinbajo, who spoke while delivering a keynote address at the Special Parliamentary Session to mark the third anniversary of the 8th Assembly of the Lagos State House of Assembly, said the ETF, which was created in 2016, was an excellent example of how State Governments could intervene in creating opportunities for small businesses.

“At this point, I want to mention that the Lagos State Employment Trust Fund which was established in 2016 is an excellent example of State intervention in creating opportunities for small businesses.

“As of May 2018, 7000 loans totaling about N5billion have already been given out and 12,500 jobs were created even within the first six months of its operation.

“This is a very important initiative of the State Government and we think that it is important because it understands and addresses the concern of an important segment of our society – the young bright minds that require some capital to multiply their thoughts and trade,” Osinbajo said.

One of the beneficiaries of the LSETF loan programme, Mr Adeoye Olumide of Jetco Global Farms whose company was granted N3.750million loan, said aside that he applied and got the loan without knowing anybody in government, the multiplier effect of the scheme was amazing as more people had been employed into his business.

“This is so unbelievable and it is so amazing. The positive effect on the entire value chain with this empowerment is very laudable and very commendable,” Olumide said.

Without a doubt, the LSETF has performed exceedingly well to the admiration of both the governor and the people of the state. It is indeed, as observers have noted one of the major achievements of the Ambode administration.