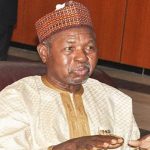 Katsina – Governor Aminu Bello Masari of Katsina state has approved the re-appointment of Alhaji Mustapha Muhammad Inuwa as the Secretary to the Government of the state.

In a statement made available and signed by Falalu Bawale, Director Administration, Government house katsina, the trio whose appointment takes immediate effect was in recognition of their dedication and commitment to the service of the state.