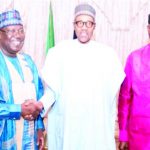 Abuja – Two months after the 9th Senate was inaugurated, commendations, criticisms and knocks have been trailing it for reasons best known to the minds profiling and analyzing the actions and inactions of the upper chamber of the National Assembly.

However, part of the reasons, some analysts said, could be traced to the comprism between the 8th and the 9th assemblies. But, while the four years of the 8th Senate could be described as a cold war between the upper chamber of the National Assembly and the executive, the 9th Senate so far in its two months could be seen as gravitating towards the executive, a development some political watchers said could erode the independence of the parliament.

The 9th Senate was inaugurated on June 11, 2019, but since it was inaugurated, while some have described the upper chamber of the National Assembly led by Ahmad Lawan as a rubber stamp of the executive, others said that the Senate is moving in the right direction, as its relationship with the executive and other stakeholders of government would enhance development and project the nation to an enviable height.

Those, who criticised the Senate under the leadership of Lawan had pointed out that the few actions taken so far portrayed the upper chamber as an extension of the executive.

They noted the accelerated and express attention given to the correspondents from the presidency and also pointed at the ways and manners the screening and confirmation of the 43 ministerial nominees sent to it by President Muhammadu Buhari was handled, which they said negate the standing rules of the upper chamber.

The Senate suspended its plenary session for one week to conduct the screening, which started on July 24 and ended on July 30, 2019. The screening and confirmation, which was done in five days, have been criticised by political analysts and other stakeholders, across the country, who described the “bow and go” privilege given to non former federal lawmakers as an aberration to what the Senate stands for.

With all the criticism and other negative nomenclature given to the Senate, the former Military President, General Ibrahim Babangida (rtd) passed a vote of confidence on the 9th National Assembly, saying the leadership and other federal lawmakers are doing a good job.

Babangida, who spoke when he received a delegation of the Peoples Democratic Party (PDP) minority caucus of the House of Representatives led by the Minority Leader, Ndudi Elumelu, said, “I am passionate in observing what is going on in the country; I develop lots of interests in the ongoing activities across the country and I think the leadership of the House of Representatives, the Speaker, the opposition leadership and everyone are all doing well.

“You represent the people and it is what they wish that you would take up. I want to commend you for doing your job honourably, and I urge you not to give up.”

In the same vein, a former House of Representatives member and All Progressives Congress (APC) stalwart, Cairo Ojougboh noted that the nation is doomed when there is no synergy among the three arms of government.

“In the presidential system for instance, it is given that the Senate president for example, must come from the majority party, the reason it is given that way is that the parliament must work in synchronism with the executive. If that does not happen, it will appear like a clog in the wheel of progress like what happened when Saraki was the President of the Senate.”

He explained that without synergy, the parliament will be moving to the right and the executive to the left and instead of harmony, there will be a blockade.

“You see that President Buhari did not find things that easy in his first term because there was always disagreement with the National Assembly so for the second term, I personally advice very seriously that the party must involve and do everything humanly possible to install its preferred candidates so that the government and the people of Nigeria can enjoy the dividends of democracy.

“In fact, I also supported and advised that the President should get actively involved in the selection of the principal officers of the Senate and the House of Representatives because, if that does not happen, there’s a great risk to the people of Nigeria, to the government and indeed to the well-being of Nigerians. So the idea of saying rubber-stamp no, there’s nothing like rubber-stamp and there is nothing like the independent of the three arms of government, no it doesn’t happen that way, there’s nothing like that.

“So the government must work with its preferred candidates and that is exactly what happened. There will be cooperation, there will be a synergy between the executive and legislature so the issue of being a rubber stamp does not exist because it is the government in power that controls both the executive and the legislature, and therefore, they are one. If you now bring the judiciary into it, it becomes like we Catholics, who say three in one God, three persons in one God and it is when you have it that way that you can have peace and harmony and progress for the nation,” he said.