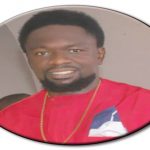 Ifeanyi Benjamin Durugbor is the real name of Mr Parrot Mouth, one the popular up and coming comedians and event comperes based in the South East. In this interview with Ifeoma Ononye, he speaks about how he started from nothing and now heading to something big.

You are fast becoming one of the popular comedians and event comperes in the South East. How did it all start for you?

I have always been anchoring people’s events but unprofessionally. I was never paid for it until l had an accommodation problem in 2008. This put me in search of accommodation in New Haven Enugu where I met Mr. David who was a Hair Barber. He saw me making people laugh at the wake of one my friend’s dad. After the wake, he encouraged me with these words. “I never knew you are this good in comedy. If I knew I would have given you my friend’s daughter’s children birthday to anchor. Which he paid the MC a sum of N40,000. Actually it was that N40,000 that I heard that pushed me into comedy and entertainment fully. I thank God I actually heard about that money. MEN and money sha.

I always heard my fans begging me daily for recharge cards, so I thought it was wise to share generally. I started doing the fastest and luckiest fingers would get the cards. I choose weekends Friday to Sunday night to share the cards. With time I started getting sponsors for the cards from friends.

Back in the days, you loved the fact you will one day be called an engineer like your elder brothers. How come after graduating as an engineer, you dropped it to MC events?

Yes, it has always been my dream to become an engineer, just like my father and my two elder brothers. The dreams haven’t left me yet at least I do wiring in my own house. I repair my generator set whenever I am less busy.  Secondly, my father-in-law loves calling me Engr.  Ben Durugbor. It always gives me extra life whenever he calls me that.

I love to be addressed as an engineer. Even in the entertainment world, people like Nkem Owoh read engineering but never Theatre Arts. This popular music artist, Dr Sid is a Medical Doctor. I think there is something in entertainment industry that attracts us all from the science world.

Some people observed that the family you come from in Imo State is very proud and well educated. Is it true? Then, where did your humble nature come from? To you there is no job that is too small or too big.

Actually I came out from a proud family. I grew up a very proud person, but poverty and hunger humbled me. Hunger humiliated me when I had challenges with my accommodation. Many of my friends threw me out of their houses. Many rejected me. I was even sleeping in my father’s Mercedes Benz which I inherited from my late dad through my eldest brother Henry.

When I decided to start comedy, it was not easy because I had to fight my pride. It wasn’t easy but I had to. Many of my friends till date have never believed I am the one they see today as MC Parrot Mouth. Even my brothers still find it hard to believe I am a comedian. I still pray to God to make me a humble comedian so I could accept whatever flaws people throw at me. God did it no doubt.

For me, no job is too small and no job is too big. The first time I did a job for MTN in Enugu at Bridge waters hotel… It’s was MTN FOUNDATION UNIVERSITY Connect Award which MTN sponsored students who had good GDP from their second year to their final year. I got the link through Mr. Ugochukwu Ashuke, who first saw me in a very poor wedding ceremony I anchored at new berries Park, Enugu. I was poorly paid but I never forgot that poor people have big relations too. So if their rich relations are impressed by my performance, I can get better jobs from there. I really thank God I did that poor job. It opened other bigger doors. Through this job I have met the Governor of Enugu State, His Excellency, RT Hon Ifeanyi Ugwuanyi.  I have met the former Governor of Anambra State and presently a minister, Dr.  Chris Ngige severally. I anchored his late father’s wake keep in Enugu with Hon. Tony One Week.

Have you always loved travelling? How are you enjoying the tour round Nigeria with your MC career?

Wow….seriously I enjoy travelling a lot. More especially when it comes to using flight. I seriously do enjoy my job and the journeys attached to it. But I don’t fail to purse and ask myself, ‘How did I really get here? How did I turn to be a person who my clients pay for my flights, hotel reservations, food and drinks just for an hour or less talk.  I give all the glory and honour to God in heaven who made it possible.

How did you come about the stage name, MC Parrot Mouth?

The name Mr. Parrot Mouth came in 2011. I started with MC Ben Durugbor, then one day as I was taking a walk, a voice came to me. I was out in a bar to change my name because with my normal name when I write jokes on Facebook, people address me as a funny man not a comedian.

So two names came to my mind, “MC Jabez” and “MC Parrot Mouth.”

I met our Assistant Parish priest from St. Michaels Catholic Church then. I gave him the two names. He advised me to drop Jabez before I get affected by the name just like the real owner of the name was affected in the Bible. That’s how I got stuck with MC Parrot Mouth. But since then, I can comfortable tell you that we have more than six people using my name MC Parrot Mouth as their stage names. Piracy of name is now endemic in the entertainment industry.

Has it affected you in anyway?

I had a female fan who discussed her wedding MC with me. And the husband went and paid another MC Parrot Mouth. I could only thank God the man in question actually came for the event otherwise I may have been apprehended by the police.

Back in the days when you were the president of your zonal youth church, did it occur to you that compering events will be where you end up?

I love God dearly and I work in his vineyard. I was the zonal president of St. Joseph’s Catholic Youth Organisation,  CYON for Sacred Heart Parish Enugu. I didn’t stop at the zone level.  I was the Parish Council second Provost under Monsignor (Dr) Okpalaibekwe. I was the Catholic Young Men Parish president after being the Secretary for years. I was also the PRO Parish Laity Council. All these involvement in church gave me a foundational rock to my entertainment skills.

Is there any other kind of career that would make you leave event compere?

I started with church politics; I wish to end up with world politics. I have always been a person who wants to serve people. I have a dream that one day that I would be a Governor of Imo State and a Senator representing my good people of Orlu Senatorial Zone in Imo State. As I was a senator in my university days representing Electrical Engineering Department, I believe it’s achievable with God on our side and  hard work.   This is funny; a comedian turns to a state governor? I wish I can wake up from sleep. But we have film actors like Tony One Week and RMD in government, so I can do that too.

We Must Work Together To Ensure Enduring Peace – Makinde