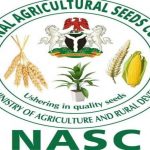 ABUJA – National Agricultural Seeds Council (NASC) has introduced a new technology designed to verify the genuineness of quality seeds used by farmers which in turn would rid the country of fake and adulterated seeds.

It would be recalled that many Nigerian farmers have been recording low yields during harvests of crops due to the use of fake and adulterated seeds.

To correct this anomaly, NASC has come up with new a technology tagged “SEEDCODEX” which is an electronic verification and authentication system introduced to enhance efficiency of the seed certification process.

Speaking at the weekend in Abuja at the unveiling of the new technology, Dr. Philip Ojo, Director General of NASC, explained that the new technology was designed to meet and exceed the needs of Nigerian famers and potential agriculture investors.

According to him, “With SEEDCODEX, farming process and agro-investment is made easy and effective for both farmers and potential farmers that require the use of quality seeds for bumper yields.

“National Agricultural Seeds Council’s mandate is ushering in quality seeds in the agriculture space in Nigeria and across West Africa and other regions of the world.

“SEEDCODEX ensures that seeds produced for use locally and for export and import will be protected from adulteration as well as have high acceptable quality in the market place.

“With the use of the technology, a farmer can confirm within a few seconds if a tag affixed to a seed package is genuinely issued by NASC through short message service (sms), the web or smart phone Apps.”

Ibrahim, who described it as “a game changer,” said the new technology would boost food productivity in the country as well as raise the incomes of farmers.

He called on all farmers across the country to embrace SEEDCODEX to guarantee bumper harvest and increased food production.