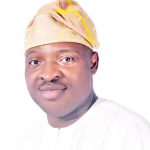 Hon. Olanrewaju Oshun is the member representing Lagos Mainland Constituency II in Lagos State House of Assembly; In this interview with AKINWUNMI KING, the lawmaker who has been a member of the House since 2007, spoke on how the federal government could improve on the security situation in the country as insecurity continues to be a major problem in the country. Excerpts:

The security situation in the country has continued to be a major concern as kidnappings, banditry, especially Boko Haram insurgency keeps growing despite claim by the federal government that it has technically defeated the sect. It’s 59th year of attaining Independence, how do you think we can address security situation with a view to getting it right?

We have the habit of blaming our leaders but we forget that everybody is a leader in his own right. Have you checked yourself to either the growth or downfall of this country? We have all contributed one way, either positively or negatively, it is now left for you to go and decide where you have contributed. It is a shame that we are still where we are with everything God has bestowed us with. But I am optimistic we will get it right soon.

But there is constant fear by Nigerians that when they give out information, they could be a source of target by these criminal elements if their identities are eventually discovered. How do you react to that?

Another way of giving out information is making phone calls. Yes I understand that there is that constant fear and I know there are bad eggs everywhere but that does not mean that every policeman or every army officer or naval officer is corrupt. We are only looking at the security agents but we also have bad eggs among the lawyers, doctors, accountants and politicians. In every basket of eggs, there will be one or two rotten eggs. We cannot because of that now paint everybody in bad pictures.

Looking at how the situation has worsened, don’t you think this is right time to heed to the call for state police?

If you look at the hierarchy from the policeman who is on the street to the DPO, to the Area Commander, to the Commissioner of Police and to Inspector General, does it make sense? But if we have state police, apart from the fact that it is going to create employment, you will know whom you are dealing with and there will be a sense of responsibility. For instance, if a person has been chosen to be the head of security in Lagos and anything happens in Lagos, you know whom to hold responsible; you know who to address it to. But in a case where you bring a CP to Lagos from Kaduna and this man has not been to Lagos all his life, what will he know about Lagos? Does he know anything about the culture of the people? But if you have a police in Lagos and you have someone from Lagos as the head, the person knows what the area entails. When there is an issue, he knows who to talk to and he knows where to go. So the creation of state police is long overdue. We need it as soon as possible; we need it like yesterday.

Unless you are telling me that the President himself is using the federal police or the security agencies against his enemies. We should know that nothing is perfect anywhere. If you are creating state police, make them independent so that they will not need to go cap in hand to anybody. I am not saying it is going to be perfect from onset. Are we saying there are not certain governors who have a relationship with the CPs in their states? So if the governors decide to use the CPs negatively, they will use them. That, to me, is not an excuse.

My fear is this, it will get to a stage that everybody will start protecting themselves and that may lead to anarchy. If I don’t believe in the government again; if I feel the government can no longer protect me, then I will be forced to protect myself and I will protect myself with everything I have.Now people have been talking about kidnapping and raping and if you have a daughter and somebody wants to rape that daughter in your presence, if you have any integrity, you would rather die than allow that person to rape your daughter in your presence. So for that no to happen, it means I will protect my family with whatever I have.

It is getting to a stage where people are now saying, let’s bring back OPC and Bakassi boys and it is becoming scary. When it started in Rwanda, nobody believed it; also in Yugoslavia and the world can’t accommodate us if it starts. So we must face these challenges head on and find a lasting solution once and for all.

The post Nigeria Was Due For State Police 20 Years Ago – Oshun appeared first on Independent Newspapers Nigeria.

AXA Mansard emerges as Top 50 Brand Of Nigeria In 2020