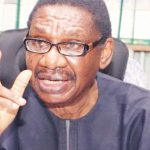 Prof. Itse Sagay (SAN), Chairman of the Presidential Advisory Committee Against Corruption (PACAC) in this interview with TEMIDAYO AKINSUYI, speaks on the ruling of the Presidential Election Petitions Tribunal which validated the election of President Muhammadu Buhari. Excerpts:

You once predicted that Atiku should accept the outcome of the 2019 presidential election and refrain from challenging the outcome in court. Now that President Buhari’s victory has been validated by the Tribunal, can you say you have been vindicated?

I think any lawyer who knows anything about Election Law would have realised that Atiku’s petition against President Buhari’s victory was futile. They went on an excursion on qualification which is really shocking because the provisions in the Constitution did not require you to even have school certificate. It simply requires you to have secondary education which is different from having a school certificate.

Buhari not only has school certificate, he has gone for many trainings and has many certificates which is by far higher than school certificate, in fact, closer to a degree. He also has Postgraduate Diploma from a course he took in America. So, the whole idea of Atiku filing petition on his educational qualification is ridiculous and they shouldn’t really have dwelt on that.

This is a man who has contested presidential election three times earlier. So, the whole petition was a ridiculous argument and I’m shocked they pressed it so far and it appears they want to continue to press it by going to the Supreme Court. In my view that was foolish.

I don’t think they were really thinking. Also, they were talking about server. Server is an electronic device and it is normally used with computers and similar devices and you can send information to it and it will be saved. The Electoral Act 2010 does not permit electronic transmission of results.

They tried to deceive President Buhari on so many occasions, fraudulently deceiving him knowing the intention they had to sign a new Bill which would have allowed electronic transmission but he refused. I think he knew what they were planning all along. If he had signed the Bill, they would have brought out this fake server. But as it is, if INEC was to say it used a server for this election and the results were transmitted electronically, it would have nullified the whole exercise.

Maybe that was what they were looking for, for INEC to admit using a server and we will have a nullity on our hands. In relying on something that is illegal, looks to me like a sort of inevitable failure or programmed failure.

The chairman of the tribunal in his ruling said the petitioner failed to prove substantial non-compliance of the electoral act in the 11 states complained to have been marred by electoral malpractices. What is your take on this?

For you to prove that the result of an election did not comply substantially with the Electoral Act, especially by saying there was fraud, wrong entry, that the results were not mathematically correct and there was difference in the votes cast and what was recorded, in the case of the presidential election, according to the present law laid down by the Supreme Court in Wike and Peterside, you need to bring all the results from virtually every polling booth in the country.

We are talking of 120,000 polling booth and you need to get somebody from each polling booth to give evidence. After that, there are voting points which will bring it to about 140,000.

So, it is an impossible task. Apart from the fact that it is not true the election was rigged because Buhari won overwhelmingly based on the results that were declared, everybody was present, the results were tabulated, added up at various stages until it got to the final stage in Abuja. Everybody followed the result up and nobody complained. Even if it was not so as it was in the case of Yar’Adua and it was not so the case of a state in this country which I don’t want to mention because I have antagonized the people involved enough, they were allowed to get away with it because evidence according to the Supreme Court must be brought polling booth by polling booth and polling point by polling point. In a state we are talking about 3,000 witnesses from each of those units and at the federal level, about 140,000. So, it an impossible task and going to the Supreme Court in my view is not advisable as the outcome will not be different from what happened at the Appeal Court.

Now that the President Buhari’s victory has been affirmed by the court, what advice do you have for him?

I will advise President Buhari to carry on and improve upon what he has been doing on the Next Level which has been successful. There are so many laudable projects going on in the country. They are now acquiring funds to carry out the railway line from Ibadan to Kano, which will also go through Abuja. They are completing the Mambilla Plateau electrical project which will light up most of the North and maybe other parts of the country. They are completing the Second Niger Bridge which all other Presidents abandoned. They are doing so many things which I can’t mention because of time. I have not even talked about social investment in which the vulnerable in Nigeria are being uplifted. The Buhari government is doing a lot of things that this country has never seen before and they are going to continue doing it. We have to be grateful to God that we have a government made up of people who want to genuinely serve and do not want anything for themselves.

The post Nigerians Should Be Grateful To God For Buhari’s Government – Sagay appeared first on Independent Newspapers Nigeria.