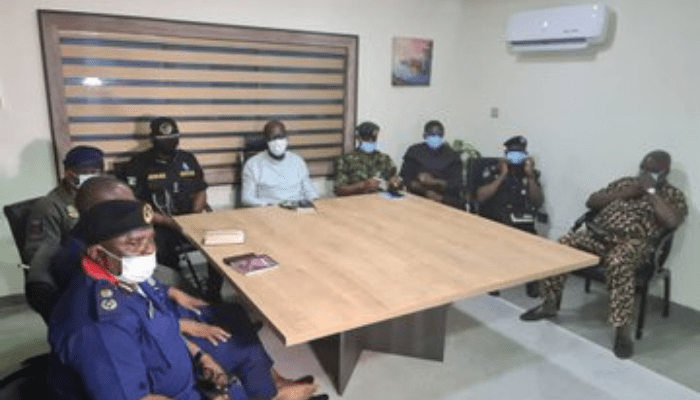 Edo State governor, Godwin Obaseki on Tuesday Night met with all security chiefs in the State following the unrest caused by suspected hoodlums in the guise of #EndSARS protests.

The state government had earlier imposed a 24-hour curfew in the state due to rising attacks by hoodlums on public and private institutions as well as innocent persons.

Obaseki who spoke shortly after the security council meeting in government house, Benin City, said the meeting became urgent to analyse the security situation in the state and find a solution to the disturbances.

The governor who thanked the Edo people for complying with the curfew order, however, warned those planning to violate the curfew.

“We just concluded a security council meeting following the
unfortunate development from the #EndSARS protest over the last few days.

“We deliberated extensively on the security issues, fortunately, the DIG Celestine Okoye has come to support the command in maintaining law and others in the state.

“You will recall that government imposed a 24-hour curfew on October 19 beginning from 4pm,” he said.

In his remarks, the Deputy Inspector General of Police, Celestine Okoye, cautioned hoodlums to remain in their houses during the curfew.

Okoye noted that he was deployed to Edo State to support the state command in maintaining law and order.

Others in attendance include Philip Shaibu, Edo State deputy governor, Johnson Kokumo, Edo State commissioner of police, the commandant of the NSCDC, and the director of DSS among others.