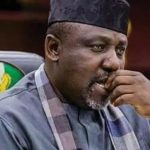 The new Secretary to the Imo state Government, Chief Uche Onyeagucha, has berated the immediate past Governor of Imo state, Owelle Rochas Okorocha, over alleged mismanagement of the state’s resources throughout his reign.

Recall that DAILY POST reported that Okorocha had disclosed that he has set aside N42.5 billion in the coffers of the state’s treasury for his successor, Chief Emeka Ihedioha.

He made the disclosure while swearing-in eleven Permanent Secretaries as well as the new Accountant-General of the state, Deacon Donald Igbo, and the new Head of Service, Mrs. Ngozi Ama Eluma, in Owerri, the state capital.

Okorocha explained that he set aside the amount so that the incoming governor won’t have any excuse for not carrying out activities of government.

But Onyeagucha, in a statement issued to newsmen and forwarded to DAILY POST on Tuesday by his Chief Press Secretary, MacDonald Enwere, insisted that no money was released to the present government of Ihedioha by the Okorocha-led past administration during the handover/swearing-in ceremony.

The SSG disclosed that not a single document was handed over to the present administration, and however, lambasted Okorocha for allegedly destroying and looting government property in Government House, Owerri, the state capital.

Onyeagucha added that the former Governor took away all vehicles in Government House, other property and sensitive government documents before leaving office.

Parts of the statement read, “I want to also use this opportunity to call on you(imolites) to give your unwavering support to the new Governor, Rt. Hon. Emeka Ihedioha.

“We should equally join hands with the present administration in ensuring that Imo State is taken to an enviable height. Again, I’m urging the Imolites to always pray for the new administration for God’s wisdom to pilot the affairs of the State.”