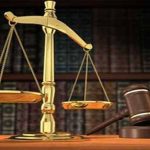 Minna – The Supreme Court sitting in Abuja, has declared Mohammed Musa as the winner of the last National Assembly election conducted for the Senate in the Niger-East Senatorial district, Niger state.

Senator Umaru, the former Senate Committee Chairman on Judiciary, Human Rights and Legal Matters has been in legal battle over the candidature of the ruling All Progressives Congress (APC) in Niger-East Senatorial district.

Mohammed Musa said his participation in the party primaries gave him the ticket, but Senator Umaru is claiming that his emergence on APC in-house arrangements which allowed him to continue in the Upper legislative Chambers without necessarily going through primaries.

But in a twist of fate, the Apex Court on Friday set aside the Abuja Court of Appeal’s judgment of 8th April, 2019 Abuja, which declared Senator David Umaru as the valid candidate of the APC and winner of the election.

In a unanimous judgment delivered by a five-man panel led by Justice Ibrahim Muhammad, the court upheld affirmed the 7th February, 2019 judgment by Justice Folashade Giwa-Ogunbanjo of the Federal High Court, Abuja, which declared Musa the validly nominated candidate of the APC for the election by insisting that Musa won the party primaries for the election and was the actual candidate for the election.

Meanwhile, Mohammed Sani Musa has hailed the Supreme Court judgment pronouncing him as the authentic candidate of the APC for the Senatorial election, even as he commended the people of Niger East Senatorial zone for their support during his legal battle to reclaim his mandate.

In a statement made available to newsmen, Sani Musa said he remained grateful to Almighty Allah for his victory and also thankful to the party leadership for standing by him throughout the duration of the legal battle to reclaim his mandate from Senator David Umaru.

Musa extended the hands of fellowship to others who contested the election with him but lost, saying that being part of the 9th Senate would facilitate speedy development of Niger-East, Niger state in general and as well support President Muhammadu Buhari in actualizing his promise of taking Nigeria to the next level.

Edo, Bank of Industry, others brainstorm on access to finance for MSMEs