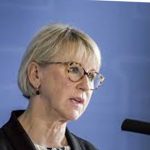 Wallstrom has informed Prime Minister Stefan Lofven that she wants to leave the government in the near future to spend more time with her family, the government said in an emailed statement on Friday, Bloomberg reports.

Wallstrom was appointed foreign minister after Sweden’s general election in 2014. Before that, she had been a first vice-president of the European Commission, a member of parliament and a minister for social affairs. She also served as the UN Secretary-General’s first special representative on sexual violence in conflict. She made women’s rights the cornerstone of her agenda, launching what she claimed was the world’s first feminist foreign policy.