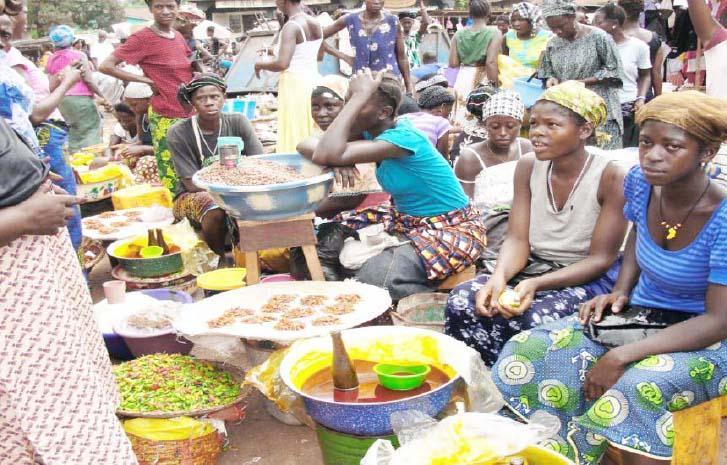 Small business operators including traders and shop owners have lamented the multiple levies they are being forced to pay by market unions in Akwa Ibom State.
Speaking a during a virtual meeting organised by Policy Alert, a Civil Society Organization on “Covid-19 Tax holiday in Akwa Ibom State”, the business operators mostly market women claimed they had been assaulted by the revenue collectors unions in the market that collects multiple levies from them.
This is coming even after the Governor,  Udom Emmanuel has given tax holiday to Small Business Operators and traders in the State to cushion the adverse economic effect of the coronavirus outbreak.
‘‘The decision is in line with the World Bank requirements for giving out grants and reward to cushion the effects of COVID-19 pandemic in the country’’, Akwa Ibom Government had said.
A trader in Uyo metropolis, Mfon Okon alleged that some agents  set up by market unions were still collecting revenue forcefully from them
According to her, ‘‘here in Akpan Andem Market, every shop is made to pay N500 for electricity, N700 for Uyo Local Government, N500 for security and N1000 as development levy amongst others.”
Another trader explained that different groups would collect  N300 as a sales ticket from each person irrespective of the value of your goods adding that the level of harassment exhibited by those agents is worrisome.
Also Ofonime Udoakpan a trader from Eket revealed that some of these acclaimed government officials stay in the bush track to waylay poor women who carry vegetables and collect money from them in the name of the ticket.
Checks reveal that the multiple levies have contributed to the high cost of basic food items such as the state.
Harry Udoh, a civil society activist,  lamented that informal revenue collection in Akwa Ibom State is fraught with allegations of corrupt practices adding that most times receipts had not been issued after payment.
Udoh who commended the State government for the tax relief urged it to ensure the enforcement so that its efforts would not be sabotaged.
However, one of the participants, Michael Inyang said the State Government should not just issue tax holiday without first, liaising with the local government authorities.
According to him, local government authorities contract the revenue generation to an individual who pays the money in full to them.
“The person or persons involved will do everything possible to recoup his money and make profits as well. So how do you expect someone who had paid that revenue at the beginning of the year to forfeit his money in the name of the tax holiday? I think the State government should meet with the local government chairmen to chat a way forward,” Inyang said.
The representative of Akwa Ibom Internal Revenue Service, Kufre Ibokette said government collects tax according to law  describing those collecting levies from market women as illegal agents  because he said  “they do not remit the money to coffers of government”
However, the Permanent Secretary, Ministry of Transport in the State,  Nse Edem reiterated that the State government has withdrawn from ticketing and other levies noting that a taskforce would be inaugurated to enforce the decision of the government.
“No more haulage levies, tickets, issue of emblems, etc. till further notice, any person caught is operating illegally and must be prosecuted,” Edem said.