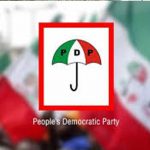 Mr Dipo Olorunrinu, the lone Peoples Democratic People (PDP) member in the Lagos State House of Assembly says he does not see any reason to approach Election Tribunal over his re-election defeat.

Olorunrinu, representing Amuwo-Odofin Constituency I in Lagos Assembly and PDP candidate in March 9 lost the seat to the APC candidate, Mrs Mojisola Alli-Macaulay.

Olorunrinu said on Wednesday in Lagos that, many people asked to approach the election tribunal, to reclaim his mandate but he would not for a personal reason.

“Many people are asking me that I should go to tribunal but I ask them if they know what tribunal cost.

“I respect the tribunal approach but sincerely, I don’t see any reason going to tribunal.

“I have served and I have respected the party that put me in this position, the Peoples Democratic Party.

`I just felt if the people could not protect my vote, defend it from being rigged, whatever way that margin of 278 came up, I should leave it to God rather than go to the tribunal.

“My supporters have also tried voting for me, but if the party (PDP) does not see a reason to go to court on my behalf, why am I going to court?’’ Olorunrinu said.

He said that as a young lawmaker, he had done his best, his bit and had been able to set a standard in the constituency.

Olorunrinu said that he had been alone in the House in the last three years and had not failed to represent the people well.

“If my people felt I am that excellent they should have protected the votes. For me, I leave everything for God Almighty, he is the One that crowns and gives positions.

“You can go and make your findings, move around, we have done things a lot of people were not able to do or could not do at all.’’

According to the first-term lawmaker, he has been able to lift the people and define some level of democracy in the constituency.

Olorunrinu noted that most voters failed to come out to vote in Feb. 23 Presidential and National Assembly in his constituency because of imaginary fear.

According to him, his belief is that God wants him to take a break and look back.

NAN reports that the PDP candidate for the Amuwo-Odofin Federal Constituency was returned in Feb. 23 elections while the Assembly lawmaker could not be returned in March 9 elections.

The candidates of the All Progressives Congress (APC) won the entire 40 seats in the House of Assembly during the poll, unlike in 2015 general elections when PDP clinched eight seats.

The post Why I Refused To Challenge My Defeat In Court – PDP Lawmaker appeared first on Independent Newspapers Nigeria.